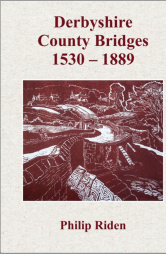 The Bridges Act of 1530 required the court of quarter sessions to repair bridges in its county or borough for which no–one else was responsible. Derbyshire applied the Act with some vigour and by 1729, when the first list was compiled, was maintaining some sixty bridges, including most of those on main roads in the county. Between then and about 1840, when the railways began to remove long–distance traffic from the roads, the number of county bridges in Derbyshire roughly doubled. During this period many were rebuilt and widened, and several fine new bridges were erected, which remain in use today. This work was undertaken by a succession of county surveyors, who evolved from working stone–masons into professionally qualified officers. All the bridges passed to the county council on its establishment in 1889. This book, based on the bridge papers which survive from the late seventeenth century in the records of quarter sessions, describes about 130 bridges in Derbyshire, ranging in date from the thirteenth century to the early nineteenth. All are located on a series of maps and a sample are illustrated. The gazetteer is prefaced by an introduction outlining the work of quarter sessions, including the careers of the county surveyors. This appears to be the first study of its kind for any county in England or Wales.