By Dudley Fowkes and Philip Riden 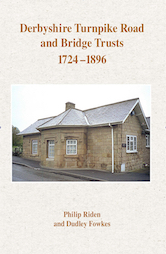 Between the early eighteenth century and the mid nineteenth, some sixty turnpike trusts were established to improve main roads in Derbyshire. These included the principal trunk routes through the county, roads radiating from Nottingham, Derby, Chesterfield and smaller towns, and roads used to distribute coal mined in the east of the county to the Peak District. Three new bridges over the Trent were also built in the same period by trusts established for the purpose: Cavendish Bridge, Harrington Bridge and Willington Bridge.

With the advent of the main–line railway network, turnpike trusts in Derbyshire as in other counties suffered from a sharp drop in toll income. From the 1860s local trusts were wound up as their Acts expired and in 1889 main roads became the responsibility of the newly established Derbyshire county council, which also in conjunction with Leicestershire county council took over the three trust bridges.

This volume provides for the first time an authoritative guide to Derbyshire turnpike road and bridge trusts, setting out the Acts by which they were created and renewed, details of any surviving archives, and a note of publications including contemporary parliamentary papers relating to particular roads. The route of each road is described in detail and shown on a specially drawn set of maps. The book includes a full index of place–names.