The Leake Catulary and the Derbyshire Estates of Welbeck Abbey 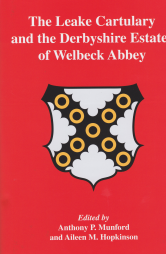 The Leake family, originally from Newark, moved to Sutton in north–east Derbyshire at the end of the fifteenth century. Sir Francis Leake benefitted in enlarging his estate by buying former monastic lands, with his grandson becoming Lord Deincourt in 1624 and earl of Scarsdale in 1645. The estate at Sutton Scarsdale was finally sold to pay debts in the mid eighteenth century.

As Sir Francis purchased from the Crown land previously belonging to Welbeck Abbey many of the deeds are abstracted from the abbey's muniments. Most of these documents are now lost, some dating from the twelfth century. This edition throws new light on the rise of an major Derbyshire gentry family and makes available medieval material for several poorly documented parishes in north–east Derbyshire.