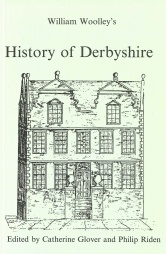 William Woolley was a Derby lead merchant trading with Spain who, after he retired from business, set about compiling a topographical and genealogical account of his native county, modelled on Robert Thoroton's Nottinghamshire (1677) and drawing on collections made by his kinsman Samuel Sanders of Little Ireton. The work was written c.1712 and remained unpublished, latterly in Derby Local Studies Library, until this edition was issued in 1981.

Like many before and since, Woolley did not complete his project. There are accounts of all the parishes in the three southern hundreds of the county (Appletree, Morleston & Litchurch and Repton & Gresley) and for the wapentake of Wirksworth, but nothing for Scarsdale or High Peak. As well as providing a conventional manorial descent for each place, Woolley's text is useful for its comments about landownership at the time he was writing and references to economic conditions in some parishes. His accounts of Derby and Wirksworth are especially detailed and valuable, and include useful details of the contemporary lead trade in which Woolley had himself been involved for many years.