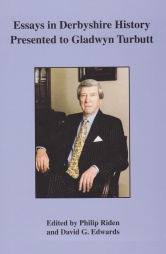 This is a Festschrift volume, issued to mark the thirtieth anniversary of the Record Society's foundation in 1977 and to pay tribute to Gladwyn Turbutt, who, in addition to an outstanding record of public service in many other areas of Derbyshire life, has been president of the society throughout its history. The essays range widely over most periods of Derbyshire's and different parts of the county. The authors are all present or past member of the Record Society committee. The full contents are as follows:

The Warren Charter of the Earl of Derby, 1251: David Crook

Notes on the Statham Book of Hours: Margaret O'Sullivan

Bess of Hardwick and the St Loe Inheritance: Philip Riden

`His bookes in the studie': An Assessment of Book Ownership among the Derbyshire Clergy, 1530–1650: Richard Clark

Portrait of a Divided Township: Donisthorpe in 1766: Margery Tranter

Derbyshire and the Establishment of the Diocese of Southwell in 1884: J.V. Beckett

The Early Days of the Derbyshire Record Office: Joan Ferguson