The Derbyshire Returns to the 1851 Religious Census 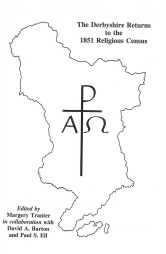 In 1851, as part of the sixth decennial census of population, the Registrar General, through his local officials and the census enumerators, sought also to collect details of all the churches, chapels and other places of worship in England and Wales, including the age, size and seating capacity of each building, the denomination to which it belonged, the number of services held there on `Census Sunday' and the number of worshippers who attended. The information returned to this enquiry, never attempted before or since, provides an invaluable picture of the state of religion at the beginning of the Victorian era, as the Church of England was mobilising its resources to meet the challenge of Nonconformity, already represented by a bewildering multiplicity of sects. This exemplary edition of the original manuscript returns for Derbyshire, a county with a mixture of town and country, upland and lowland, industry and agriculture, in which virtually every shade of Christian faith found some followers, joins those published for other parts of the country in shedding further light on the organisation of religion at local level in the mid nineteenth century.