The Derbyshire Gentry in the Fifteenth Century 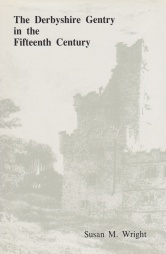 Derbyshire in the later Middle Ages was a poor, thinly populated county, whose economic importance lay mainly in the lead industry of the Peak. With no major lay or ecclesiastical landowner in the county, politics and society were dominated by local gentry, ranging from knights whose wealth approached that of a minor peer to modest squires. They were the influential resident landowners who controlled local administration, engaged in the lead trade, and sough office under the Duchy of Lancaster, the main agent of Crown influence in the county. The gentry of fifteenth–century Derbyshire had made themselves the acknowledged rulers of the county and did not welcome intrusion from outside.

Dr Wright's book brings this society to life. There are chapters on the sources of gentry income and how they spent it; how they organised their households and estates, provided for and negotiated the marriages of their children, and arranged their affairs after death; how they controlled local office, chose Members of Parliament, and dealt with the Crown, Duchy and magnates, notably Lord Hastings; and how they quarrelled amongst themselves and tried to regulate such conflict, both within and without the system of royal justice. This is a detailed, very human story of landed society told against a background of the county itself and the turbulent politics of the fifteenth century.