Derbyshire Wills proved in the Prerogative Court of Canterbury 1393–1574 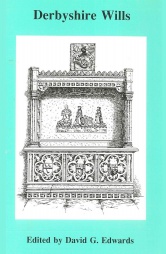 These two volumes make available detailed summaries of 397 wills made by Derbyshire men and women which were proved in the central probate court down to the end of the sixteenth century. Most date from the reign of Elizabeth I and throw a wealth of light on many aspects of Derbyshire society during that period. Alongside the wills of major gentry figures are those of merchants from Derby and other towns, and also those of comparatively modest yeomen or craftsmen who happened to leave estate in both Lichfield and another diocese. Most of the wills have never been published before; others have been available in inaccurate or incomplete transcripts. The texts are complemented by a introduction discussing the scope and value of the material and full indexes of persons, places and subjects.