The Derbyshire Lead Industry in the 16th Century 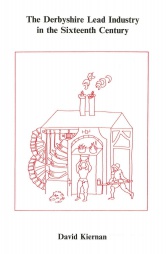 The mining and smelting of lead is Derbyshire's oldest industry apart from farming, and has long attracted attention from local antiquaries. By contrast, this is a detailed scholarly account of the industry during a period in which it emerged from late medieval decline into years of rapid growth, thanks to the introduction of new smelting techniques and the input of much great capital resources from leading landowners in the region, above all the sixth earl of Shrewsbury. Dr Kiernan's book explain how the new technology came to Derbyshire, where it was adopted, and by whom. The rise of a new class of lead merchants in Derby, Chesterfield and Wirksworth is traced, including many families who later became gentry.

The trade in lead in fully described, showing how goods made their way from the Peak eastwards towards the Trent, chiefly via Bawtry, where both Shrewsbury and lesser figures helped to develop the port facilities. There is also a chapter on the manufacture and distribution of finished lead products both at home and abroad. The main text is supported by detailed appendices which make available new lists of lead smelting sites and other data, and a glossary of technical terms.